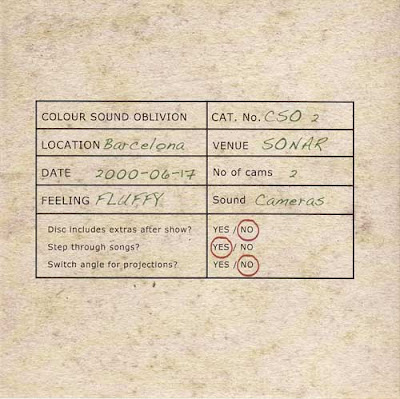 The Universe is a Haunted House/Chasms 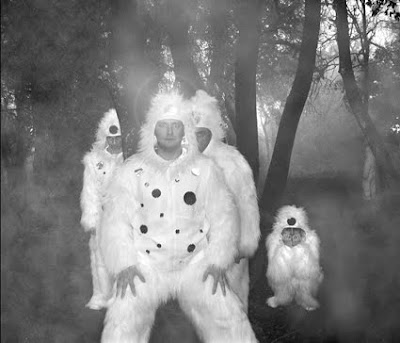 I was fortunate enough to see Coil play twice, both in 2000. The first time I saw them was their first proper concert performance at the Royal Festival Hall as part of Julian Cope’s Cornucopia programme, performed just over two months before the Sonar performance captured on this disc. This was a perfomance intially billed as The Industrial use of Semen Will Revolutionise the Human Race.The anticipation around Coil’s first London performance was immense, matched only by the speculation surrounding their likely setlist and stage appearance. I remember that I was initially quite startled when Coil came on stage, bathed in a deep purple light, as a four-piece clad in hooded white fluffy costumes covered with miniature mirrors, to take up their places at assigned synthesiser stations in front of a backdrop bearing the John Dee Monad from their 1998 Time Machines album. 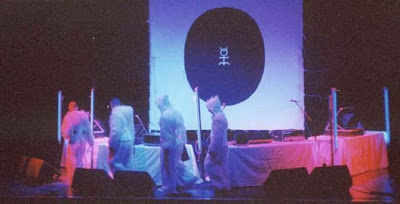 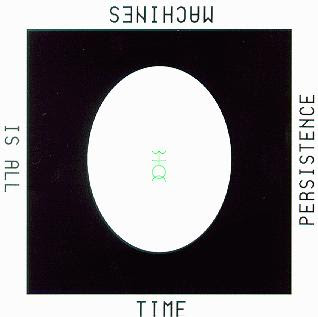 They proceeded to perform a relatively ‘short’ set, lasting a mere 40 minutes; yet they played three of the most intense, dynamic and astonishing electronic drones I’d ever heard live. But what I also found striking was their overall stage presence throughout their brief performance; there was an overwhelming sense of them performing a predetermined and highly focussed ritual composed of slow and deliberate movements. I remember being struck by the careful and controlled movement of the four members on stage, it seemed highly choreographed and intentional, compromised of slow synchronised movements and pre-established routines around the stage. Visually it seemed to have the same aura and power as Beckett’s late stage masterpiece Quad. 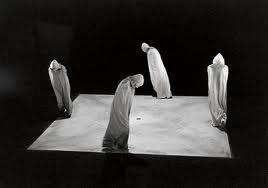 Coil presented themselves as mysteriously coordinated figures, all clad in identical costumes, tracing out a hidden geometry as if in another dimension than that of the real. Their music suggested an inexorable descent through some kind of fabulous portal akin to the journey undertaken by Bowman during the extraordinary psychedelic sequence in Kubrick’s 2001: A Space Odyssey. This seemed like a journey in both inner and outer space, as well as being a journey in time. The three pieces of music played that night managed to elaborate very powerful dynamics whilst appearing largely static. This was an experiment in altering our perception of time, and to be an extension to the work previously undertaken in the studio on Time Machines. The performative ritual accompanying this music only added to the sense of a strange elongation of time - slow and careful repetitions across the stage, minimal interactions between the four, indiscernible manipulation of mirrors, crystals, incense, wands, etc, all designed to provide the audience with a very powerful transcendent and magickal experience. The final piece, Chasms, presented a vast backdrop of electronic drones which were punctuated by the most enormous and resonant slabs of electronic sound and Balance intoning as if from another dimension the Crowleyean dictum ‘Every Man and Every Woman is a Star’. By any measure this was an extraordinary and astonishing performance, one of those rare and intense experiences that irrevocably alters you in some ill-defined way. 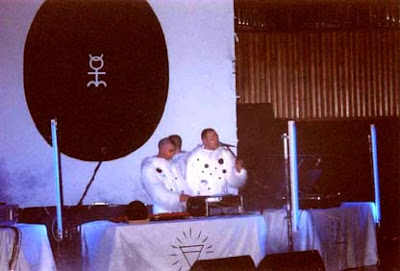 The live performance on the second disc of the Colour Sound Oblivion collection comprises Coil's second performance from 2000, which was at Barcelona's Sonar festival. For this performance Coil again appeared clad in the fluffy mirrored costumes from the London show. Their set here repeats the pieces they had played live in the earlier Royal Festival Hall show (Everything Keeps Dissolving, Circulating and Chasms), but adds three new songs to the setlist, including a beautiful permutation of Amethyst Deceivers. Coil were joined by Bill Breeze for this performance, playing viola throughout the entire set, adding some astonishing aural flourishes which will be familiar to anybody who has heard his previous work with Coil on the Solstice EPs. Christopherson has managed to successfully edit together two different recordings of the concert, of quite varying visual quality, in order to present a full record of the performance that is somehow faithful to its extraordinarily intense spirit.

As someone who saw Coil’s first performance there is no doubt that some of the highly controlled and mysterious quality of that earlier outing was lost in the transition to a much smaller and more intimate venue, but it still amounts to an extraordinarily odd, strange and entirely original experience. The footage enables us to be up-close and personal with the group as they perform on stage, and we are able to see the levels of intense concentration that accompanied the three longer electronic manipulations being carried out by the group over the top of predetermined aural backdrops. 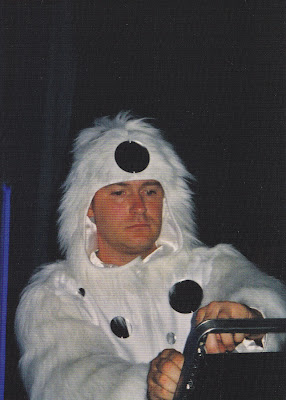 This is accompanied by some aspects of the same ritual deliberation that had been such a feature of their earlier London performance – mirrors, crystals, incense and coordinated and synchronised movements. Balance appears restrained and intense throughout these pieces. Yet, we also begin to get a sense of what will increasingly become such a central feature of Coil’s subsequent live work – Balance’s unconstrained, unbalanced and totally inspirational performances. The final piece, Elves, (where Coil are joined on stage by a wild ecstatic female dancer) has Balance roaring out, over the top of frenetic electronics, with the fury of a man possessed the words ‘God Please Fuck My Mind For Good’. 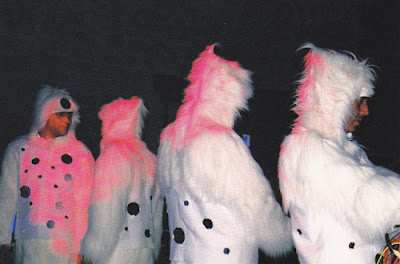 The first two concerts performed by Coil in 2000 were truly astonishing, and set the bar extremely high with regard to what they went on to become. Of course they made the decision to proceed, more often than not, with a more ‘traditional’ song-based approach for subsequent sustained tours, yet this was always brutally transgressed by Balance’s anarchic and inspirational improvisations. Coil could never be described as a 'traditional' band. However, watching their 2000 performance from Sonar on this disc, and with my memories of Time Machines Live in London, I’m left with a melancholic sense, had Balance survived his battle with alcoholism, of what else they might have achieved, of what else this astonishing group might have gone on to do as an entity exploring ecstatic passages through time. 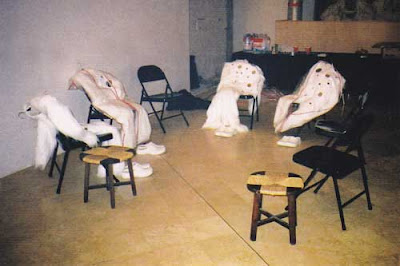