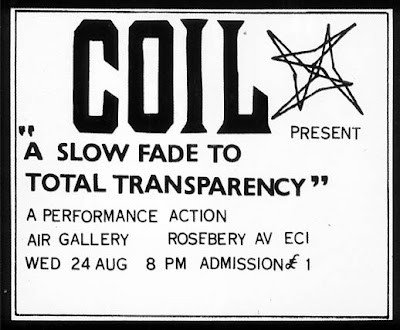 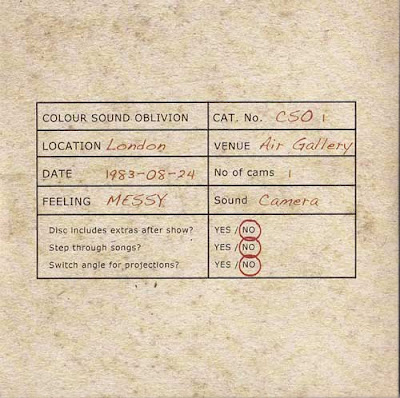 A Slow Fade to Total Transparency

“John Gosling, Marc Almond and I performed something called 'A Slow Fade To Total Transparency' (How to Destroy Angels) . . at the Air Gallery on 24th August. This was a mixture of reading by Marc and a performance by John and me. It was videoed and I think it will be released in some form. Also Cerith Wyn-Evans, a super 8 film maker is planning to do a film around the original idea.” (John Balance)

The 1983 Coil performance of A Slow Fade to Total Transparency begins with John Gosling (who appears at the beginning to be wearing some kind of night shirt)and John Balance (who is naked apart from a spiked leather thong) preparing materials for a ritual. Balance, clutching a large syringe, has already wrapped some wire around his head and is in the process of tying a tourniquet around his upper arm. The sound being played at the beginning is from Pasolini’s film Salo, including dialogue taken from the infamous shit banquet where the hapless victims are instructed to ‘Mangia!! Mangia!!’ After a minute Marc Almond begins to read a piece of sustained sadistic loathing seemingly addressed to a former lover over the top of recordings of electronic drones (which are quite indistinct). What follows is an intensely intimate performance by both Gosling and Balance, involving winding themselves tightly in wire, cutting and blood-letting, self-strangulation, smearing with liquids, urination, and performing ritualistic manipulations of various objects, many of which are indiscernible. The performance lasts 23 minutes and ends with Balance affecting a prolonged seizure during which he writhes spasmodically across the floor before being assisted from the room by Gosling. 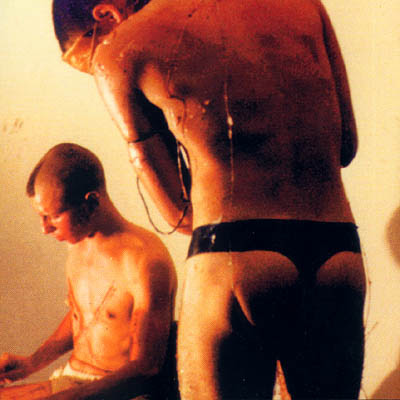 It is difficult to fully grasp the nature of the intimate and visually arresting ritualistic performance captured on this disc without at least understanding something of its occult context. Both John Gosling and John Balance had been early central members of Psychic TV and The Temple of Psychic Youth, (both appear here bearing the tattoos and haircuts associated with their allegiance to the occult organisation), along with the P-Orridges, David Tibet, Peter Christopherson (who supplies the aural backdrop for this performance) and to a lesser extent Marc Almond (who provides the reading which accompanies this performance). In 1983 Balance and Christopherson were in the process of breaking away from their association with Temple and P-Orridge (having performed a handful of live concerts with Psychic TV in 1982 and 1983), and to establish Coil as a completely autonomous entity in order to go on pursuing their own distinctive and highly focussed path. 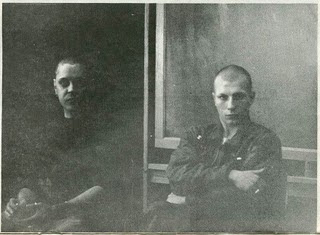 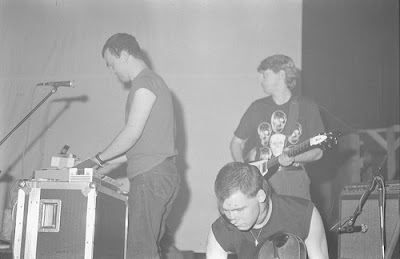 As is evident from the early Temple of Psychic Youth video First Transmissions the type of transgressive ritual performed here by Gosling and Balance had already played an important part in the magickal activities of the entire group. The ritual depicted in First Transmissions involves members of the group freely experimenting with different thresholds and boundaries of control, including scarification, blood-letting, sexual experimentation, pain and humiliation. Superficially both the ritual work in First Transmission and this early 1983 public performance by Coil resemble the extreme performance art work of Otto Muehl & Hermann Nitsch of the Vienna Actionists of the late 1960’s and early 1970’s. 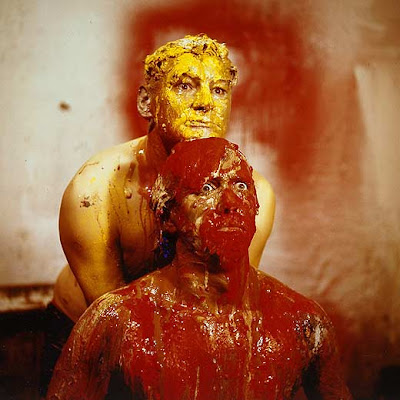 Both appear to involve an aggressive visceral quality, attacking the integrity of the body, obsessed with bodily fluids, and overt displays of ritualistic humiliation, pain and control. However, to over-identify in this way is a mistake. Arguably Muehl & Nitsch’s public actions had much more to do with challenging, through art, the historical specificity of post-war Austrian social, psychological and sexual repression and an entire culture that had been intimately complicit with the Nazis. Their work was a deliberate effort to transgress cultural boundaries in a very violent, aggressive, playful and messy way; their intention always being to provide a cathartic Dionysian conduit for all the repulsive tendencies that Austrians had repressed and which had previously found social and political expression through fascism. Far more relevant to this early Coil live piece is the work of Coum Transmissions in the 1970, who were clearly influenced by the extreme and violent anti- aesthetic of Viennese Actionism, but who were much more concerned with the intrinsically mystical and occult nature of transgressive performance. 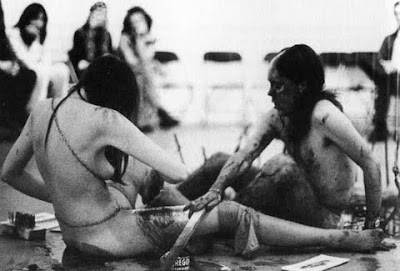 Coum Transmissions had positioned themselves throughout the early to mid-1970's as largely indifferent to the art world and the high culture of the avant-garde, and had been more concerned with pursuing a highly focussed and disciplined set of very personal (and magickal) concerns surrounding sexuality, identity and freedom. The desire to pursue some of the mystical and magickal aspects of extreme threshold experiences had been carried through the public performance actions of Coum Transmissions by P-Orridge and Christopherson back into the private and intimate realm of the Temple of Psychic Youth. It is in this context within which the early 1983 Coil performance documented on the first disc of the Colour Sound Oblivion box-set should be understood.

However, the experience of performing this piece was clearly a depressing and dispiriting one for Balance, as he once remarked - “When we played at Brixton and the Air Gallery there was no challenge and I ended up very depressed, as for the most part we seemed to be doing it for a jaded, apathetic crowd of art groupies. That's how it seemed. The whole thing was so incestuous and every move you made, everything you did or said was noted and compared to something previous. I feel Coil can move out of that area and I want it to.”

Coil’s attempt to take their private magickal work on threshold experience back out into the public realm (in the aftermath of their steady break from Psychic TV and the Temple), namely through an art performance, seemingly involves a superficial repetition of surface elements drawn from Vienna Actionism and Coum Transmissions. Only in this sense could it ever be judged as somewhat derivative. However, their concerns were perhaps by this point quite radically different from either one of these groups. From another perspective then, one could say that the public form of the performance was simply ill-suited to their actual concerns. Balance’s remarks reveal him to have been deeply disappointed by the experience of performing this action for an art audience, when the magickal and ritual intentions were always beyond the expectations of the London art world in the early 1980’s. The extent to which this performance was and remains art is the extent to which it attempts to connect with an ancient transgressive and threshold experience associated with the very origins of all art (as outlined by Nietzsche and Bataille) . It entails the vertiginous and ecstatic experience of placing the human subject at the very threshold of the animal through rigorous ritualistic experimentation, to somehow undo the fact of being trapped within the confines of the human and attempt to reach a point of indiscernibility between man and animal. Only at the threshold of the human can one ever achieve anything approaching a dematerialised ‘spiritual’ state where one becomes almost ‘transparent’. This is something that remained extremely important to all of Coil’s recorded work undertaken in private and away from the audience for the next seventeen years, as they 'moved out of one area' and into another. However, it is extraordinary to finally be able to watch this early and intense manifestation of Coil and to realise that, despite the fact it is never repeated in public in this form, it somehow holds the key to much that comes later.
Posted by Darren at 03:07