The Children are Guilty 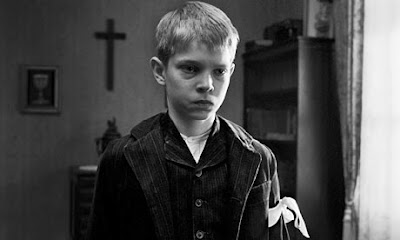 In April 2009 in Edlington, South Yorkshire, two brothers aged 10 and 11 apparently lured two other boys,aged 9 and 10, into the woods where they subjected them to an abject catalogue of physical savagery and sexual sadism.

Watching the media coverage of their trial in recent days has laid bare the appalling cultural abjection to which we have all become subject. It is not the crimes themselves, which no one can deny are savage and appalling, but the utterly infantile and pathetic public, media, political and legal discourse around the case. These abstract and hysterical discourses all express a singular epistemology of ‘the children are guilty’. In 2010 in our seeming state of benign and complacent enlightenment we appear to be happy to asign absolute guilt and responsibility to two boys, aged 10 and 11. Surely this complacency screams of a massive collective failure to ‘think’ this event itself. I spent many hours watching a variety of media outlets report the boys’ trial, and read a great deal that was written at the same time. With only a few exceptions, such as Blake Morrison’s excellent piece (‘Let the Circus Begin’) that appeared in The Guardian at the time of the boys’ original arrest, the majority of the reporting and comment singularly failed to even think about the systemic ‘causes’ that led to such a terrible event. A single assumption has pervaded the discourse - ‘The Children are guilty’ – making it easy to condemn them as ‘evil bastards’ or ‘devil children’.

Evident from the discourse around the Edlington case, is an all too familiar failure to think about the unremmiting and abject ‘reality’ within which these events happened and will continue to happen…a failure to think at all. Can there be any more powerful spectacle of such a monumental failure in the capacity to ‘think’ than the trial itself. TV news and newspapers returned again and again to the pathetic spectacle, communicated through childish and badly executed pastel sketches of the two boys (aged 10 and 11) being brought to account for their crimes in front of the court. 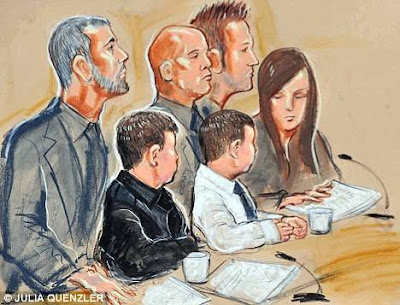 Here the full assembly of the current judicial system confronted two isolated young boys (aged 10 and 11), alone with no parents or family present. No parents present. The spectral figures of parental failure (adults) apparently never having to account for themselves or their children (aged 10 and 11) before the ‘court’, and what’s more, it never really mattering since the only reality which matters to us is one where ‘the children are guilty’. As their mother articulated so brilliantly – ‘It’s got nowt to do with me!’ The accounts of their ‘toxic homelife’ are treated as familiar footnotes unconnected with the events that took place, just some kind of drab aesthetic backdrop to the real spectacle of their culpability, their guilt. It was reported again and again, with overwhelming cynical disdain, that when asked by police why they carried out the attack the boys had replied ‘because we were bored’. Why the cynical disdain? Do we not believe them when they say this? Are we so over-invested in the ‘interesting’ reality we have created,and into which these two children (aged 10 and 11) were forced to exist, that we simply cannot believe that a deep and catastrophic psychic death occurred to these children. A psychic death brought about by the sheer toxcity of their everyday reality that fundamentally undermined any connection whatsoever to the world. Is it not possible that a monumental boredom emerges from the most horrific developmental indifference and neglect, and this this leads to the most savage and nihilistic expression possible? Is it that to think in such a way undermines our almost mystic commitment to the axiom that ‘the children are guilty’?

The failure, by their parents and by us, to apparently be able to even begin to think about what these two boys (aged 10 and 11) did to two other boys (aged 9 and 10), and why they did it (with echoes of the 1993 Jamie Bulger case) is a truly nauseating spectacle. 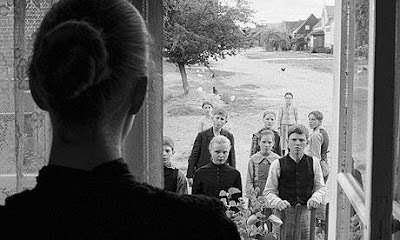 Michael Haneke’s recent film The White Ribbon does seem to offer us some kind of a way of beginning to think about our failure to think through an event such as the one that occurred in Edlington. But it is an indirect and disturbing experience, often uncomfortable and deeply unsettling to watch.


Set on the eve of the First World War in 1913, and shot in black and white, the film is set in a north German village where a series of bizarre crimes and unexplained acts of violence (two of which are perpetrated against young children, and have clear echoes of the savagery evident in the Edlington case) are being committed. These senseless and savage acts may in fact be carried out by the children of the village, although the film never allows us to become certain of this. Haneke, in attempting to think these senseless acts uses an oblique approach whereby the children’s guilt is never actually assumed or established. This allows Haneke to do something quite remarkable and increasingly rare: to actually look and to think about what else is happening around the children. What is in fact happening to them is equal to, if not more horrific than, the ‘senseless’ acts of violence. It is all the more disturbing for the fact that what happens to them in their everyday lives supposedly has ‘sense’. What happens to them in this community has become so normal, so much part of the sterile homogeneity of accepted everyday reality that no one (no adult) really questions it. Systematic abuse and violence by adults towards children is endemic, the emotional neglect and indifference towards children by adults is rife, and the level of community endorsed repression is startling. The 'white ribbon' of the film’s title refers to the bands of shame that are tied round the arms of the pastor’s ‘naughty’ children who are subjected to his extreme physical and psychological discipline, and even (in the case of the village doctor’s daughter) sexual abuse. 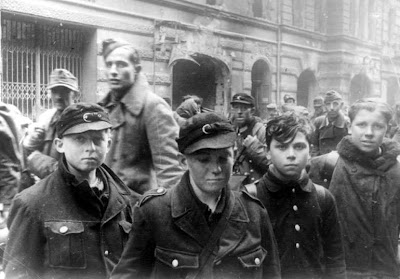 Some critics have theorised that Haneke is attempting to explain the beginnings of fascism - that the generation of children who carry out these senseless and savage acts of cruelty on other children will grow up to be the generation that spawns the Nazis in Germany. But this seems to be a deeply mistaken understanding of the film; what the film is really about is the failures of the present. It is a film about our current failures with regard to our children, the failure to create a world that is not marked by absolutely endemic cruelty, indifference, greed, and stupidity. It is a film about the nihilism of the present. Haneke’s film is an attempt to re-engage the appalling moral complacency of present western societies that have become so sick and intellectually cretinous that we all easily accept a situation where we now have trials where we assign guilt to children (aged 10 and 11) where the fault almost certainly lies in their everyday lives, in the appalling reality we (adults) have created and go on reproducing, and into which our ‘guilty’ children are born.
Posted by Darren at 14:30 No comments: