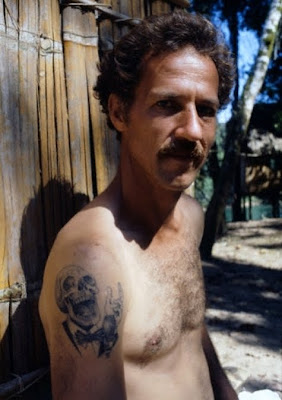 The Great Ecstasy of the Woodcarver Steiner (Herzog, 1974)

Herzog has described his 1974 documentary The Great Ecstasy of the Woodcarver Steiner as one of his most important films. Ostensibly a "documentary" made about the Swiss ski-jumper Walter Steiner's mammoth death-defying and record-breaking leaps made during the championships in Planica, Yugoslavia in March 1974, Herzog transforms the material on Steiner into a powerful meditation upon the capacity to ecstatically transcend the apparent limitations of the human condition. As Herzog, himself obsessed from an early age by ski-jumping, once said - "They dream they can fly and want to step into this ecstasy which pushes against the laws of nature - Ski-jumping is not just an athletic pursuit, it is something very spiritual too, a question of how to master the fear of death and isolation. It is as if they are flying into the deepest, darkest abyss there is. These are men who step outside all that we are as human beings, and overcoming this mortal fear, the deep anxiety these men go through, this is what is so striking about ski-jumpers".


From its remarkable opening sequence, in which we see a ski ‘flight’ played to us at 1/20th speed set to the hypnotic tones of regular collaborator Popol Vuh we immediately become aware that this is much more than a mere documentary. Herzog makes no real attempt to contextualise the event for us, or even attempt to elaborate a meaningful psychological explanation of those individuals who participate. He relies upon beautiful super slow speed camera footage of the skiers in mid-flight , and their often violent and catastrophic landings, accompanied with possibly one of the most beautiful soundtracks ever produced by Popol Vuh. The stunning imagery of open-mouthed ski-flyers in mid-air aiming towards the vast white space of the landing area captures perfectly the sheer ecstasy that the competitors feel from achieving the gracefulness of flight. This documentary miraculously manages to express moments of genuine euphoria and weaves a powerful dreamlike mythology about those who repeatedly attempt to transcend the very limits of the human. 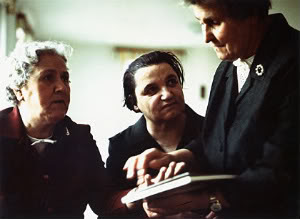 Land of Silence and Darkness was Werner Herzog's first feature-length documentary, made in 1971. Herzog has said of this film that it "is without doubt one of the most essential and important things I've done". It tells the story of Fini Straubinger, at the time a leader of, and advocate for, the deaf and blind in Germany. Straubinger developed a unique tactile form of communication which she uses to talk with and teach some other deaf-blind people who have language-learning capacity. Like many of his other characters, Herzog portrays Fini and the other deaf-mute people as lonely outsiders isolated from society, suffering from an inability to communicate their existence. 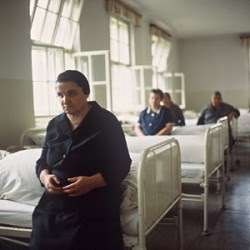 It is a film utterly driven by an obsessive compulsion to communicate, seeing it as touching upon the deepest question of what it means to be human, and this is central to its enduring mystery, beauty and power. The film begins with Fini communicating with other deaf-blind individuals who have a comparable grasp of the tactile language, with many of them having become deaf-blind later in life. There are some extremely powerful scenes of them sharing poems at Fini’s birthday party, them taking a first aircraft flight, a visit to a botanical garden and a zoo. However, the film transports us from this realm of silence and darkness inexorably towards a far stranger and mysterious place by introducing those who have been deaf-blind from birth. These individuals are seemingly totally locked into their terrible isolation with little or no way of communicating their interiorty. Herzog presents some of the ways these children are being taught to communicate, but we are told that it is seemingly impossible to communicate abstract concepts such as ‘good’, ‘bad’, ‘love’ and ‘happiness’. Amidst this seeming despair and lonliness Fini is repeatedly filmed reaching out to these children, to touch and to try and communicate with them. Fini's efforts at communication become transcendent and transformative acts. At this point it becomes about communicating the bare presence of others to individuals trapped in a terrible form of lonliness, a dignified communion of lonely souls. Herzog said of it - "In the film one finds the most radical and absolute human dignity, human suffering stripped bare".


At the heart of the film is a seemingly perverse and paradoxical tension arising from the attempt to use the medium of film - a medium that appears to be limited to communicating through the senses of sound and sight - to examine people who can neither see not hear and their efforts to communicate with others and the world around them. The sensual form of communication that is at the heart of the film, unlocking the deaf-blind from their strange and bleak solitude and loneliness, seems to provoke Herzog to try and discover a uniquely 'haptic' form of cinema, a cinema capable of turning the eye into an organ of touch as well as seeing, as well as a cinema capable of exploring deeply spiritual and profound sensations. Arguably, the most powerful modes of spiritual communication in the film comes from those non-discursive touches that create a sensory communion that is more immediate and less ordered, see for example the young deaf-blind boy Harald luxuriating in the pure sensual delight of the shower, or Fini's remarkable tactile interactions with a young deaf-blind man Vladimir and her introduction of the radio which he grasps to his chest as if it were a living thing. 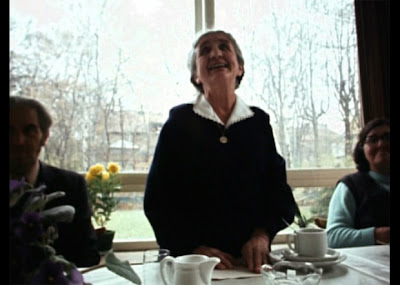 In interviews Herzog has claimed that all of the protagonists in his films (both documentaries and fictional features) are sympathetic points of self-reference, as if he has been gradually filming his own life. The inability to communicate their interiority and their existence reflects Herzog's own struggle to find “a new grammar of images” capable of communicating a deeper and more profound sense of the truth of existence cinematically. In his 1999 “Minnesota Declaration”, Herzog laid out the principles of his personal documentary style, attacking the failure of cinema vérité to go beyond a superficial “truth of accountants” based in objective facticity. Herzog distinguishes between the mundane facts of the surface and a far deeper and more profound “ecstatic truth” that can only be reached “through fabrication and imagination and stylization”.To this end, a subtle stylisation is employed in both The Great Ecstasy of the Woodcarver Steiner and Land of Silence and Darkness, and virtually all of his documentaries (with subjects all too willing to cooperate in the process), whether by staging certain scenes for the camera, scripting bits of dialogue, or even fabricating whole sequences from limited historical facts. To get a sense of how Herzog elaborates "ecstatic truth" in these films it is necessary to draw attention to a number of things which occur there. During the Land of Silence and Darkness Fini Strauber, who has become deaf and blind in later life, says that something she remembers from her childhood was watching men fly in the air at a ski-jumping competition. As she says this an image of a man flying with his skis against the sky is inserted by Herzog. Yet, this strange premonition of Walter Steiner which is presented as an important memory of Fini's occurs before the film about Steiner. In fact it is four years before Herzog made The Great Ecstasy of the Woodcarver Steiner. Herzog has subsequently acknowledged that this "memory" was fabricated, and that he gave Fini the sentence to speak, which he says she immediately understood the reason why. It speaks of Herzog's own attitudes towards ski-jumpers and his intuition that a sensuous link could be formed between Fini and them. Of ski-jumpers he has said - "Ski-jumping is not just an athletic pursuit, it is something very spiritual too, a question of how to master the fear of death and isolation.It is as if they are flying into the deepest, darkest abyss there is. These are men who step outside all that we are as human beings, and overcoming this mortal fear, the deep anxiety these men go through, this is what is so striking about ski-jumpers." By fabricating a memory of ski-jumpers for Fini Herzog is intuitively linking the two together in order to suggest a very deep, almost spiritual, truth about Fini's character. Herzog himself says - "Very early on, I had the feeling that only through invention and stylization would I reach a very deep truth about a character, even in a documentary. So in this case it is made up. But as much as it is made up, it also points to her deepest truth".

Again, at the very end of The Great Ecstasy of the Woodcarver Steiner, the beautiful quotation from Steiner that is overlaid over the most astonishing slow motion footage of him landing in the bleak wilderness is fabricated by Herzog (the text actually being drawn from the Swiss writer Robert Walser), presumably because he believes it says something essential about Steiner.

I should be all alone in this world
Me, Steiner and no other living being.
No sun, no culture; I, naked on a high rock
No storm, no snow, no banks, no money
No time and no breath.
Then, finally, I would not be afraid any more.

Again and again in his documentaries we see this process of fabulation, and it expresses Herzog's efforts to mine a deeper and more profound truth than the mere factual. He says - "We must ask of reality: how important is it really? And: how important, really, is the factual? Of course, we can't disregard the factual; it has normative power. But it can never give us the kind of illumination, the ecstatic flash, from which truth emerges. There are deeper strata of truth in cinema, and there is such a thing as poetic, ecstatic truth. It is mysterious and elusive, and can be reached only through fabrication and imagination and stylization."

[These are notes from an aborted talk which accompanied a recent screening of Werner Herzog’s The Great Ecstasy of the Woodcarver Steiner & Land of Silence and Darkness]
Posted by Darren at 03:26